Cybil Lewis is a kick-azz heroine. She's quick with her wit, her lasergun and finding the bad guy (or girl). If you want it/her/him/them found, Cybil's got you covered. She's a private inspector in the year 2146. If you enjoy dystopian settings, quick action, mystery and verbal sass, this series is for you. Join this private-eye in life-altering adventures in a near-future world that's as diverse as it is dangerous. 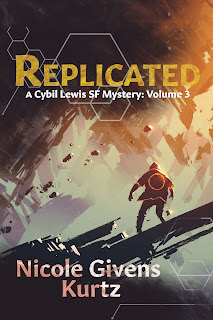 Private Inspector, Cybil Lewis's life is fairly complicated in post war D.C. aka The District. She and Jane are enjoying a typical Monday when a blast from her past strolls through the door.

Long before Cybil had Jane, she'd solved a missing person's case for the soldier...so what mess was he bringing to her this time?

What unfolds is a case so wrought with wickedness, that it will take all of Cybil's skills, including her favorite gun, and her favorite partner, Jane to investigate.

After all, DNA doesn't lie. People do. Get REPLICATED today.
at 6:51 AM 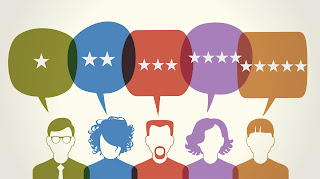 Read more on for the feedback, and remember to show your authors some love by posting reviews too. We love feedback about as much as Cybil loves her pug lasergun.

"I haven't read Sci-Fi in a while, and I am so glad that I came back with this title. Fast paced, with a kicking heroine--- yes, this series is where you can get back into the Sci-Fi groove." 5 Star Review from Wynelda Shelton for REUNITED: A Cybil Lewis Story.

""Silenced" is a great combination of science fiction and murder mystery. I appreciate how the sci-fi setting seemed very realistic and flowed throughout the story without needing to be overly explained to the reader." 5 Star Review from Talitha Jeffrey for SILENCED: A Cybil Lewis Novel

Have you read any of Cybil Lewis' adventures? If so, consider writing a review! If you haven't already joined Nicole's Pulp Reports newsletter, we invite you to sign up. It comes out quarterly, and won't clog up your inbox.
at 9:45 AM 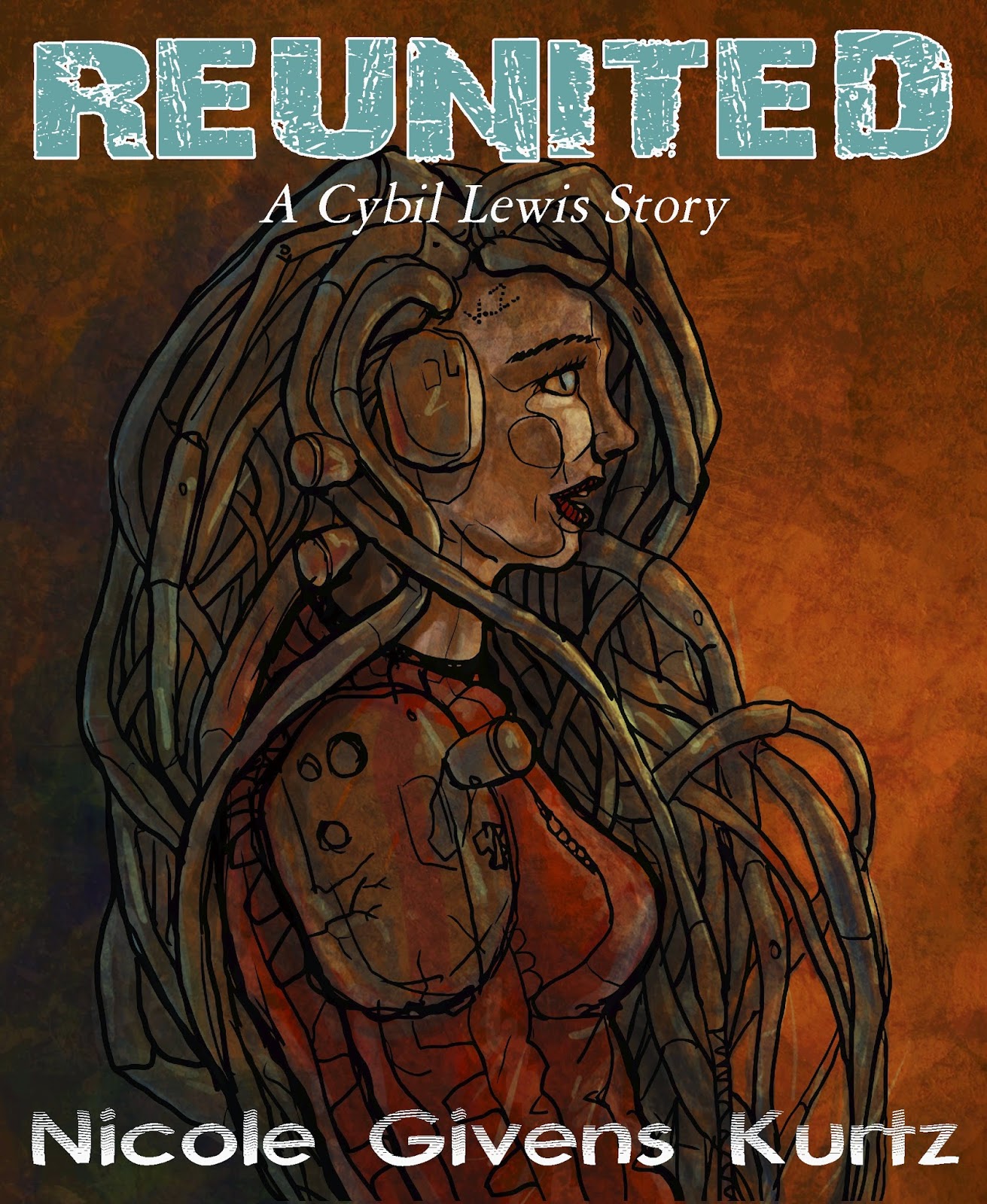 Once published in an anthology titled, Space Cops (out of print), Nicole Givens Kurtz's short story, REUNITED: A Cybil Lewis Story has been republished into e-book format.

The story opens upon the futuristic divided states, in The dystopian District, where Cybil lives and works. This is Cybil unlike we've seen her before, without Jane, and that beginning of her career as a private inspector.

When a soldier returns from the moon colony wars, ravaged and worried about his missing wife, Cybil's gut warns her to pass. Recalling her own days in service, she decides to help Benjamin Satou’s locate his other half. The small fact that Satou's a cyborg, a military secret and ethics nightmare only makes her want to walk away from the case even more. In the end, her curiosity gets the better of her in this fast-paced, futuristic pulp thriller.

Cybil will do all she can to get the two lovers, Reunited.

Winter in the District

The morning's gray clouds huddled against the cold blast of wind howling through The District. It's morning like these that I longed for a nice, sexy man lying beside me, his body's warmth wafting out against me. Then I remembered all the antics that come with the other parts of a relationship.

The telemonitor buzzed and soon Jane's face appeared on the screen. Her usual early morning scowl spoiled her flawless complexion. Dark green eyes peered through slits. When I clicked on audible, the rush of annoyance weighed in--loud and clear.

"Cyb, I just got a ready call from a man out of the Southwest Territories. He claims to have information, about...about..."

I crossed my arms. "Get on with it Jane. It's early yet."

The hammering of my heart increased at the mention of the Southwest. My niece and my sister lived out in the Southwest territories. Traveling between the territories always involved a heightened level of danger. Unlike the Northwest Territories, the Southwest seemed to have its act together.

Still nothing was absolute in this new world order.

Jane cursed and then turned back to the screen. "They're missin'. They're gone..."

All that raging hammering of my heart, stopped. Cold. "What?"

"The uh, local regs, contacted the office and it rolled over to me. I got me bags packed."

I terminated the transmission. With my body on autopilot, I was showered, packed and in the wauto in less than 8 minutes. With only 2 minutes of hot water, getting cleaned had become a precise use of precision washing.

Numb, I couldn't feel anything except a rising fury. Whomever nicked my niece and my sister were going to feel all of my wrath.
at 12:19 PM

I did it! I just finished typing THE END on my latest Cybil Lewis story. It's titled, REPLICATED: A CYBIL LEWIS NOVELLA. The story takes place a month after the events in COZENED.

However, some of the characters are from REUNITED, a short story that appeared in SPACE COPS.

You don't have to have read REUNITED, as this is a stand alone Cybil Lewis story.

Below, I'm giving a sneak peek into the first several paragraphs of the story below.

Please note this is an unedited excerpt.


Monday around noon, I landed my wauto, a wind automobile, in front of my office building, a square hulk structure with dank, dark windows that offered views out over the impoverished, the depraved, and the former capitol building. With the United States divided into a series of territories and pieces, the District had become an entity unto itself. What was once shared within a unified country became a grab all for territories in proximity to the goodies. So in a blink, the district became a looming presence in the puzzle pieces the territories became. Some sections befriended the district; others sought ways to defend themselves against others.


Trust didn’t exist between the territories. Think of it as a bunch of young siblings whose parents had died unexpectedly in an accident. There’s no one to watch, correct, or punish their behavior—in seconds, everything burst into scrapes, squabbles, and screeching between territories. The drawn lines on the map weren’t invisible. People physically felt them as they crossed over from one to the other. The culture, the regulations, and the cities’ textures varied.


My office at nestled around the section filled with mixed use structures and war-weary residents. The area had long since been discarded by more prominent people.


The lobby doors opened to reveal Jane at her desk, typing—well, pecking—away on her report for a client who had hired us to document--with graphics for her lawyer and court proceedings—all of her husband’s comings and goings. Not that she was divorcing him. She wanted the jpegs to have him committed to a mental institution. Seems the husband's fetish for robot parts had finally forced her to take some action.


Who would trust such a secret to me?


Because I keep things private. I’m Cybil Lewis. Private inspector and all around busy body about the District.

It's talking that sucks big sweaty, uh, yeah. It stinks.


You would think that in this day and time, I mean, it is 2147, that people wouldn't have to write anymore. They’d be able to talk and words would appear on their tablets, on paper—if you could find some, or instantly in some software program.
And you'd be right.

But what I've learned over the years I've been a p.i., is the important parts of life don't come out of your mouth or at the end of your lasergun.

Okay, I take it back. It does matter what comes out of your lasergun.

What has kept me from certain death is my ability to listen. Active listening. It's made the difference between finding a very naughty violator and the D.C. Regulators. So, if you want success in life, take it from me. 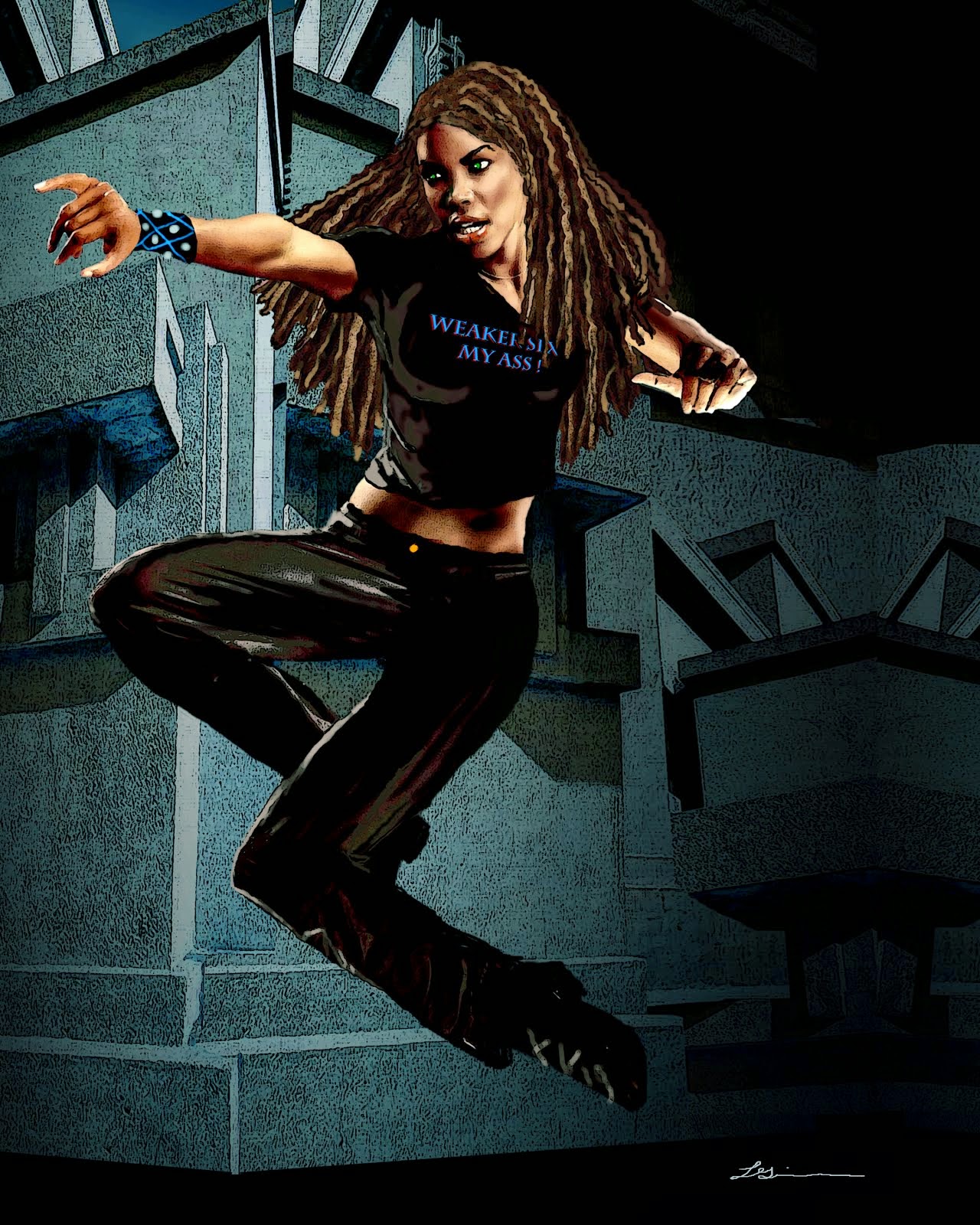 Who died and made me the expert on success?

Not me. I'm an expert on surviving. I’m private inspector, Cybil Lewis.

In these dangerous times, survival is  succeeding.

But not everyone is great at active listening.

Take for example, my investigator-in-training, Jane. She'd just as soon stab you as ask you questions.

Smart. Fierce. Quiet, Jane would kick the ever-loving crap outta you, Jane is a recovering Marine. She's all about action, but not so much about listening to you drone on about your cat, your son who's in the moon wars, or the fact your sister stole your wauto, wind automobile, and moved to the Midwest Territories.

You could hire us to find your vehicle, but maybe even your son on the moon. Come in. Talk to us about what you want found.

Over the next few months, myself or Jane, will be writing. Reflection is good for the soul.

To be honest, it keeps me from smashing someone's face in and lets me blow off steam. 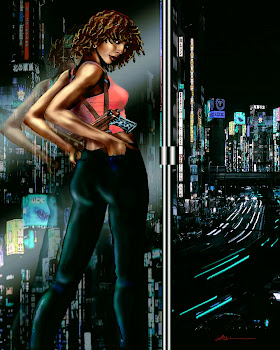 Books in the Cybil Lewis Series